I was approached by Nick LaBella, a model I had shot earlier in the year, to do some “fall shooting.” Nick was looking for updates to his port along the lines of men’s fashion. Based on Nick’s look, I decided to contact Amber C., another model I had shot previously in the year, who had demonstrated action attitude. She agreed. 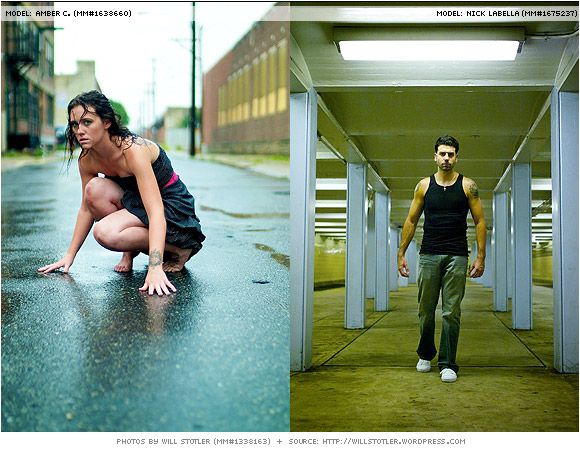 I had two models with which to work, both of which had strong looks and willingness to work a scene. Well, now what? I had been wanting to do an “action shoot” for some time and figured: “This is it.” So, I spoke with both models and they agreed to do action shooting in addition to “standard” fall fashion portfolio work—and to bring black “Matrix-like” clothing to the shoot.

Two models. Ready to shoot action. Well, let’s not waste the opportunity through a lack of planning, eh?

I decided to keep the action shooting small and doable. To generate ideas and get a good view of what the final product might be, I knew I’d need to do previsualization (“previz”) so I could think about story. Without story—at least in the flow of images—I’d have nothing. I grabbed my 5-volume set of Vertigo’s The Losers off of my shelf and started to flip through. Most of it wasn’t useful for my purposes, but there were individual shots I really liked. So, I stayed away from storyline and looked strictly at the layout of panels, the positioning of characters in the individual panels, and the use of angle/distance to convey mood and action.

In the end, I scanned in about 12 pages from the whole set and swapped them around, using a page-level cut-up technique, and settled on a flow of six pages, the first and last being “signature” looks, and the four pages in-between conveying a rough flow of action. The key to this process was to find pages and panels that would convey a scene—completely divorced from the characters that appear on those pages and panels.

The final, rough version of the previz, looked like this:

For story, I settled on a confrontation between a courier (with a Haliburton Zero briefcase)—played by Nick—and a contracted assassin who wanted to steal the briefcase—played by Amber.

What I needed for Amber was a gun. I tossed around the idea of having her use a Glock. But it wasn’t enough. Based on Amber’s presence, I needed big, unreal, badass-looking guns.

Results from the shoot can be seen below.

NO I didn’t get something as stylish as what I wanted, but I did get lots of practice with linear narrative. And Amber and Nick had fun. So, win-win.

Will on the Web